We are very pleased to announce that all Irish Studies in Europe titles will be made open-access two years after publication. The most recent publications are available to EFACIS members via a login and password available from our Coordinator at efaciscoord@efacis.eu. 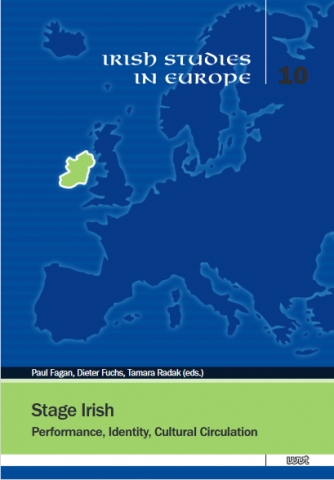 Stage Irish: Performance, Identity, Cultural Circulation brings together chapters which revisit and
reconsider diverse modes of (mis)representing, performing, articulating, witnessing, constructing,
and deconstructing ‘Irishness’ from a twenty-first-century vantage. The time is ripe for such a
inquiry. The Celtic Tiger and Brexit, the Marriage Equality referendum and the #Repealthe8th and
#WakingTheFeminists campaigns compel us to turn to history and representation (in literature, drama,
art, music, film, television, non-fiction, popular, and digital culture) to reassess how ‘Irishness’ has
been shaped and reshaped through parochial, national, and international performances and gazes as
a variously class-coded, gendered, sexual, religious, national, and artistic identity. This focus on the
cultural, societal, historical, and political interfaces between performance, performativity, spectatorship,
and identity in diverse Irish and international contexts reveals tensions between self-image and
Othering, innovation and cliché, cultural production and negotiated reception. 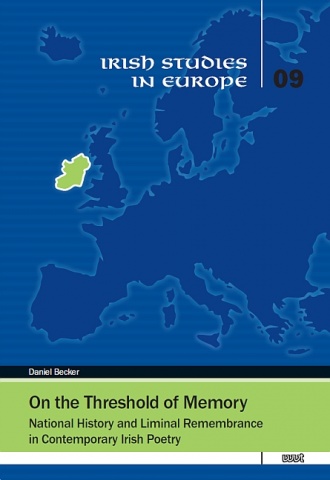 Irish Studies in Europe Vol. IX: On the Threshold of Memory: National History and Liminal Remembrance in Contemporary Irish Poetry

Whether in the form of idealised ancient times or the representation of more recent political events, Irish national history often obtained a central position in the work of many Irish poets throughout the twentieth century. In more recent years, however, these strong ties between poetry and history appear to have been severed: As current research suggests, many contemporary Irish poets, who started publishing their works around the year 2000, have turned their poetic focus away from national concerns and, thus, have exchanged the topic of Irish national history for a more 'post-national' present-day perspective. Yet, this impression is misleading, as the present book will show. By analysing selected poems by Iggy McGovern, Tom French, Vona Groarke, Martina Evans, Leanne O’Sullivan, Paul Perry, Lorna Shaughnessy, Paula Cunningham, as well as the more intensively researched writers Paula Meehan and Paul Durcan, this study will argue that Irish history still finds its proper place in the work of contemporary Irish poets. More specifically, this book will focus on one of the most dominant ways of remembering Ireland's past in recent poetry: the negotiation of history via liminal remembrance, which refers to the observation that many contemporary Irish poems represent aspects of Irish history in between being remembered and being forgotten at the same time. 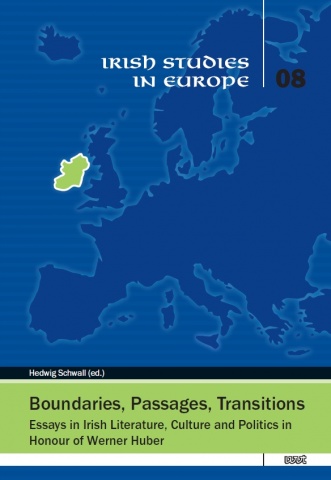 Contents:Boundaries, Passages, Transitions: An Introduction (Hedwig Schwall) – Going Global? (Declan Kiberd) – “Ungenerous, though not mean”: Scheme for the Purchase of Evacuated Dwellings (Katherine Side) – Performing Belfast: Stewart Parker’s Northern Star (1984) and Pentecost (1987) (Stefanie Lehner) – “Beyond the Troubles”: Parody and the Northern Irish Thriller in Ceasefire Cinema (Stephanie Schwerter) – Gaelic games and the films of John Ford (Seán Crosson) – Intermedial Drama and the Commodification of Irish Identities (Jochen Achilles) – “Did you like how I made that turn, Officer?”: Martin McDonagh’s Hangmen (Ondrej Pilný) – Martin McDonagh’s Epistemological Instability: The Noose of Hangmen (Joan FitzPatrick Dean) – Post-Celtic Tiger Crisis Genderized and the Escape to Virtual Realities in Nancy Harris’s No Romance (Mária Kurdi) – Another Listen to the Music in James Joyce’s “A Mother” (Gerry Smyth) – Out of Joint: James Joyce and ‘Irish Time’ (Paul Fagan) – ‘Sigmund Freud … Analyze This’: The Joys of Freud and the ‘Cycloannalism’ of Finnegans Wake (Tamara Radak) – Beyond England: Bringing Ireland into the Victorian Novel, the Case of Anthony Trollope (John McCourt) – “The soul within me burned / Italia, my Italia, at thy name”: Wilde’s Early Poems and his Fascination with Italy (Donatella Abbate Badin) – Beyond Transition: Elizabeth Bowen’s Seven Winters (Elena Cotta Ramusino) – The House of Fiction: Dermot Healy’s Short Stories (Keith Hopper and Neil Murphy) – Race and Ethnicity across the Atlantic: Revising the Discourse of Nation-Building in Colum McCann's Transatlantic, Sebastian Barry's On Canaan's Side and Colm Tóibín's Brooklyn (Sylvie Mikowski) – Werner Huber Testimonies (The English department of the University of Vienna, Klaus Lubbers, Catherine Maignant, Filomena Louro, Giovanna Tallone, Paul Fagan, Seán Crosson) 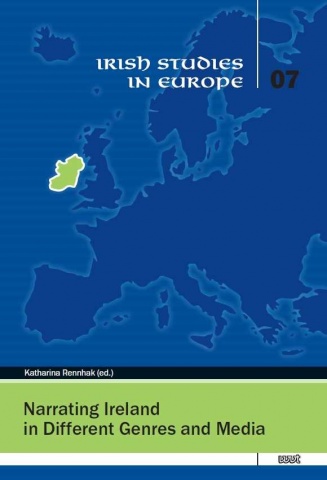 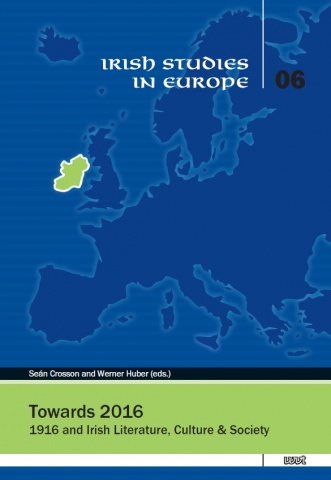 Towards 2016: 1916 in Irish Literature, Culture & Society is cognisant of the multiple perspectives and events that are associated with 1916 in Ireland and their continuing relevance to Irish literature, culture and society. The collection considers a broad range of cultural forms and societal issues, including politics, theatre, traditional music, poetry, James Joyce, greyhound sports, graphic novels, contemporary fiction, documentary, language, political representation, and the Irish economy with contributions from both emerging academics and established scholars. Also featured is an interview with acclaimed film director and novelist Neil Jordan (conducted by novelist Patrick McCabe) on his life and work, including his biopic Michael Collins (1996), a work which includes one of the most memorable renderings of the Rising and its aftermath. Among the questions considered in the collection are: What were the formative influences on one of leaders of the Rising, James Connolly? What effect had the Rising on Ireland’s fledgling labour movement? What impact did the Rising have on the Abbey and Irish theatre? What connects 1916, James Joyce, and the Cuban Revolution? What is the relevance of 1916 to Irish traditional music? What place has 1916 in contemporary Irish fiction and poetry? What are the relations between the Rising, sequential art, popular culture, and memory? A century after the 1916 Proclamation spoke of equality between women and men, could Ireland be finally about to realise equal gender distribution in politics? Does ‘Irish sovereignty’, a central concern of the Rising leaders, have any relevance for Ireland in the contemporary globalised and European Union context?

Claudia Luppino (Florence)
ARRIVALS AND DEPARTURES IN THE NOVELS AND SHORT STORIES
OF JOHN MCGAHERN, COLM TÓIBÍN, AND CLAIRE KEEGAN 109 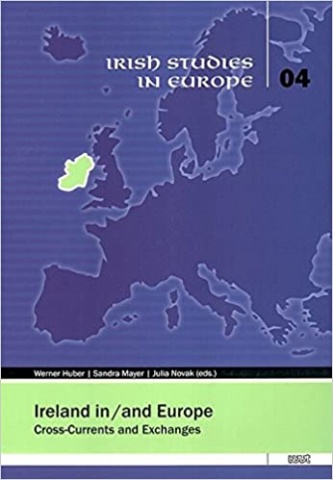 Contents:Mossbawn via Mantua: Ireland in/and Europe: Cross-Currents and Exchanges (Seamus Heaney) – Hy Brasil: Cartographic Error, Celtic Elysium, or the New Jerusalem? Early Literary Representations of the Imaginary Brasil Island (Barbara Freitag) – “My Change of Character”: Rousseauisme and Maria Edgeworth’s Ennui (Eglantina Remport) – The Rise of the Hungarian Dandy: Oscar Wilde’s Contribution to the Experience of Modernity in Early-Twentieth-Century Hungary (Gabriella V.) – Published in Paris: Samuel Beckett, George Reavey, and the Europa Press (Sandra Andrea O’Connell) – Franco’s Spain: A Dubious Refuge for the Poets of the ‘Irish Beat Generation’ in the 1960s (Ute Anna Mittermaier) – From Utopia to Heterotopia: Irish Writers Narrating the Spanish Civil War (Sarah Heinz) – Fantastic Longings: The Moral Cartography of Kate O’Brien’s Mary Lavelle (Michael G. Cronin) – John Broderick and the French Catholic Novel (Eamon Maher) – A Fruitful Exchange: A Comparative Study of the Different Versions of John McGahern’s The Leavetaking and its French Translation Journée d’adieu by Alain Delahaye (Claudia Luppino) – “Aren’t We Citizens of the World?”: Irish Diaspora and Its Discontents in Deirdre Madden’s One by One in the Darkness, Anne Devlin’s After Easter, and Nuala O’Faolain’s My Dream of You (Michaela Schrage-Früh) – A Clearing in Inferno: Banvillean Constructions of Prague in Prague Pictures and Kepler (Hedda Friberg-Harnesk) – Exile, Migration, and ‘the Other’ in Contemporary Irish Writing (Angela Vaupel) – Two Recessions and a Boom: Where Next for Ireland? (John FitzGerald) – Whither the State?: The Recent Evolution of the Role of the State in Ireland (Anne Groutel) – Ireland and European Post-Secularism (Catherine Maignant) – The Representation of Ireland in Two Nineteenth-Century French Journals (Claire Dubois) – The Business of Pleasure: Modernity, Marketing, and Music Hall in fin-de-siècle Ireland (Alison O’Malley-Younger) – The Irish in Continental Europe and Ireland: Sustained Connectedness Across a Virtual Diaspora Space? (Gráinne O’Keeffe-Vigneron) – Mutational Patterns in the Teaching of Irish as a Foreign Language at the University of Vienna (Theresa-Susanna Illés) – Promoting Mutual Understanding and/or Enriching the Curriculum? The Contribution of the ‘Ireland in Schools’ Forum to Bringing Ireland into the English Classroom (Lesley Lelourec) 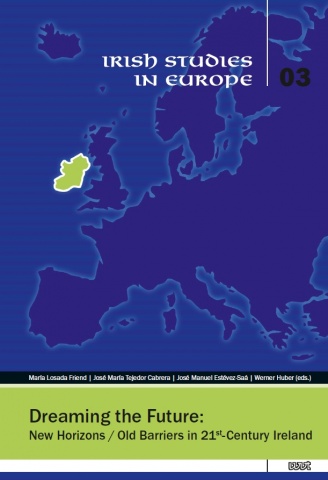 Irish Studies in Europe Vol. II: Place and Memory in the New Ireland

Irish Studies in Europe Vol. I: Ireland, Representation and Responsibility

Contents: John Synge in Context; or, Re-Positioning Synge: The Point of Balance (A. Saddlemyer) - 'The Death of an Author': Collaborative Voices in J.M. Synge's Deirdre of the Sorrows (1910) (L. Pereira) - The Contemporary First-Person Novel in Ireland: Renewal of an Old Tradition? (E. D'hoker) - 'Frightened with my own hatred': Telling Violence in Jennifer Johnston's Fool's Sanctuary and The Invisible Worm (T. Casal) - 'Northern and troubled, southern and peaceful': Absence, Punishment, and the Disappeared in Films on the North of Ireland (Y. Igoe) - Ulster-Scots History and Culture: A North Channel Perspective (J. Erskine) - Representation and Responsibility: Women in Northern Ireland/the North of Ireland: A Conversation in Descant (M. Hill, E. Rooney) - To Act or Not to Act: Parliamentary Representations of Irish Poverty in the 1830s (A.-C. Lobo) - De Valera Remembering: A Study in Memory and Self-Representation (M. Böss) - The Irish in Post-War Britain: Towards Greater Visibility? (G. O'Keeffe-Vigneron) - Deconstructing Media Reports of Sexual Abuse: An Analysis of Framing in Irish Print Media Coverage of Sexual Abuse, 1993-2002 (M.J. Breen) - Public Representations of a Private Choice: Irish Daily Newspapers and the Referenda on Abortion of 1992 and 2002 (J. Mercereau) - Faith and Responsibility in Contemporary Ireland (C. Maignant)