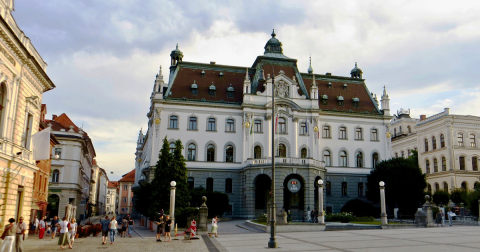 Igor Maver (Head of the American Studies Interdisciplinary Doctoral Programme, Faculty of Arts of the University of Ljubljana);

Welcome from the organisers!

The University of Ljubljana, in partnership with EFACIS and The Vienna Centre for Irish Studies, is proud to welcome you to an interdisciplinary Irish Studies conference in memory of Prof. Werner Huber. The conference’s theme of Stage Irish invites us to revisit and reconsider diverse modes of (mis)representing, performing, articulating, witnessing, constructing, and deconstructing ‘Irishness’ as an identity, as a genre, and as a contested coordinate in diverse critical fields. The time is ripe for such an inquiry.

First, the rubric of the ‘stage Irishman and woman’, while long a commonplace in the field, has not been rigorously re-examined for some time, providing a real opportunity to re-open this critical debate with the tools and insights of contemporary criticism and theory. Secondly, we find ourselves at a liminal moment in which the very concept of Irishness is being remade and its possibilities reimagined. The Celtic Tiger and Brexit, the Marriage Equality referendum and the #Repealthe8th and #WakingTheFeminists campaigns, the 20th anniversary of the Good Friday Agreement and the re-politicisation of the border compel us to turn to history and representation (across disciplines, genres, media, and platforms) to reassess how ‘Irishness’ has been shaped and reshaped as a parochial, (inter)national, gendered, sexual, religious, political, artistic identity.

This focus on the cultural, societal, historical, and political interfaces between performance, spectatorship, and identity in diverse Irish contexts reveals tensions between self-image and Othering, innovation and cliché, cultural production and negotiated reception. The programme, which we are pleased to share with you here, addresses these questions from myriad theoretical vantages and critical perspectives, touching on questions of aesthetics, power, authenticity, authority, stereotyping, genre, and nationality in the spheres of the literary, the performative, the visual, the social, the economic, the political, and the historical.

Each of the conference’s keynote addresses draws our attention to a fascinating aspect of this theme, from reimagining the stage Irish woman in adaptations by contemporary Irish women playwrights (Anne Fogarty, University College Dublin) to the theory of the dramatic passions in James Joyce’s writing (Ruben Borg, The Hebrew University of Jerusalem) and performances of queer belonging, conflict and reconciliation in post-agreement theatre from Northern Ireland (Stefanie Lehner, Queen’s University Belfast). We are also pleased to host a plenary roundtable session on the Aistriú translation project. The social programme boasts some of the most exciting poets and authors currently working in Ireland, courtesy of the EFACIS Irish Itinerary: Wendy Erskine (Sweet Home), Annemarie Ní Churreáin (Bloodroot, Town), Mary O’Donnell (The Light Makers, Empire), Jessica Traynor (Liffey Swim, The Quick). The status of the EFACIS conference as a truly interdisciplinary Irish studies event is borne out in the programme you will find in these pages. In this regard, it is a fitting tribute to the late Prof. Werner Huber (University of Vienna), to whose memory this event is dedicated. The immense range of literary, cultural, medial, and historical coordinates of Werner’s work and interests will be fondly remembered by many in attendance, and the conference draws inspiration from his pioneering interdisciplinary research and great contribution to the development of Irish Studies in Europe.