Gaelic Games on Film: From silent films to Hollywood hurling, horror and the emergence of Irish cinema 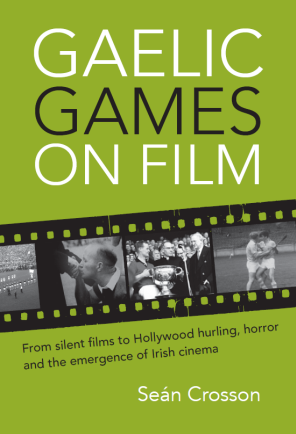 Gaelic Games on Film: From silent films to Hollywood hurling, horror and the emergence of Irish cinema (Cork University Press 2019)

Gaelic games have repeatedly provided filmmakers and producers with a resonant motif through which they have represented perceived aspects of Irish identity, perceived as these representations have been neither straightforward nor unproblematic: in international productions in particular, Gaelic games have been employed on occasion as a short hand for regressive stereotypes associated with Irish people, including their alleged propensity for violence. For indigenous producers, on the other hand, Gaelic games afforded distinctive Irish cultural practices and as such were featured to promote and affirm the Irish nation, particularly as an indigenous film culture began to emerge in the aftermath of World War II. As the twentieth century developed, a critical turn became evident within indigenous productions featuring Gaelic games though the dominant stereotypes of the past have continued to appear, particularly in international productions.

This study provides the first major monograph examination of filmic representations of Gaelic games, charting these representations from the earliest years of the twentieth century, including silent films such as Knocknagow (1918) to more recent productions Michael Collins (1996) and The Wind that Shakes the Barley (2006). Among the areas examined are newsreel depictions of Gaelic games; Hollywood’s fascination with hurling in the mid-20th century (including in the work of Oscar-winning director John Ford), which led to a range of productions featuring the sport culminating with the Oscar-nominated short Three Kisses (Paramount, 1955); the importance of the depictions of Gaelic games to the emergence of a distinctive Irish film culture post WWII; and the role of Gaelic games in contemporary cinema.

Gaelic Games on Film will be launched by Dr. Paul Rouse (School of History, UCD) on Wednesday, 15 May at 6pm in the Irish Film Institute, 6 Eustace St, Temple Bar, Dublin, and all are welcome. The launch will be followed at 7pm by screenings of relevant films featuring Gaelic games, including Rooney (1958). Further information on the screenings is available here:https://ifi.ie/rooney-from-the-vaults/

Further book information, including ordering details, is available at https://www.corkuniversitypress.com/Gaelic-Games-on-Film-p/9781782052470.htm

If you would like to request a copy of the book to review for a journal or other publication, please contact Mike Collins at mike.collins@ucc.ie