'Songs of Joyce' is a musical extravaganza of songs drawn from the life and works of James Joyce, from bawdy street ballads and sea shanties to music hall hits and folksongs. Performed with gusto by Sinead Murphy and Darina Gallagher, this musical evocation of an era has been acclaimed by critics and academics alike, and to date has performed sell-out shows all over Ireland as well as Glasgow, Boston, New York and Moscow.

Following the success of their award winning show 'Songs of Joyce', Darina Gallagher and Sinead Murphy have created a new Joycean musical, 'Misses Liffey'. Through words and music, Anna Livia Plurabelle brings us on a riverrun journey through the city of Dublin introducing us to many of James Joyce’s female characters that live, work, sing and laugh along her banks. We hear from Nuvoletta and the Washerwomen from Finnegans Wake, the Morkan Sisters and Eveline from Dubliners and the Siren barmaids, Dilly Dedalus and the seaside girls in Ulysses. Anna finally bids us farewell as she meets her cold, mad father - the sea, only to fin again, begin again… 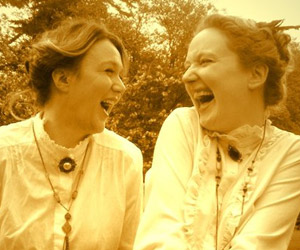