2023 EFACIS Conference in Belfast: 'Unions and Partitions in Ireland' 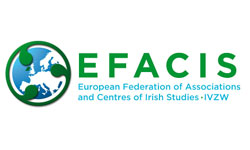 ‘Unions and Partitions in Ireland’

EFACIS (European Federation of Associations and Centres of Irish Studies) travels to Belfast for the first time in 2023, during a pivotal time for Northern Ireland. The ‘Decade of Centenaries’ (2012-22) in the north has demonstrated that public memories of Ireland’s partition and the creation of the successor states remain raw, highly contested and potentially explosive. Changing demographics and political instability now render the future of that 1920-22 settlement highly uncertain. The impact of the UK’s Brexit on Ireland, north and south, continues to complicate Northern Ireland’s engagement with the European Union as well as the United Kingdom.

This conference offers the opportunity to reflect on the political, social and cultural implications of this rolling crisis, and its historical antecedents in the constitutional unions and partitions of the past. It also invites reflection on profound cultural questions about Irish identities on what remains a partitioned island. This has and continues to play out in the cultural politics of language, and in rich seams of writing addressing the Irish border and partitions of culture, religion, class, and sexualities, north and south. At the same time, as Irish society in both parts of the island becomes increasingly diversified as a consequence of cultural and social change and migration, the dominance of older binaries of unitary identity has become increasingly challenged.

We invite paper proposals from all fields and disciplines of Irish Studies relating to our themes of ‘unions and partitions’ in Ireland, broadly conceived - encompassing not only the political and cultural divisions of the island, but unions and partitions in a range of fields including sexualities, marriage/divorce, class relations, the relationships of past and present, and disciplinary and personal boundaries in Irish Studies.

The conference is hosted by the Institute of Irish Studies at Queen’s, in collaboration with the Seamus Heaney Centre and the Senator George J. Mitchell Institute for Global Peace, Security and Justice, and with the support of the School of History, Anthropology, Philosophy and Politics (HAPP) and the School of Arts, English and Languages (AEL).

The conference will take place in-person on the main (Lanyon) campus of Queen's University Belfast, on 24-27 August 2023. Currently no Covid restrictions are in place in Northern Ireland, but we will update participants should public health guidance change.

Themes for discussion include:

To propose either a conference panel/roundtable (3 speakers) or an individual paper, please send an email to efacis2023@qub.ac.uk by 27 February 2023.

Proposals should include: name(s), institutional affiliation(s), paper title(s), a 250-word abstract (500 words for a panel) and a brief biographical sketch of up to 50 words. Prospective speakers will be notified of a decision by 9 March 2023.

Proposals and papers may be presented in either the Irish or English language. / Cuirtear fáilte roimh pháipéir i nGaeilge nó i mBéarla.

We welcome panels relating to the work of the Mitchell Institute respecting conflict transformation, security and justice issues in relation to Northern Ireland / Ireland, and would ask relevant panel proposers to indicate that they would like to be considered for financial assistance from the Mitchell Institute for their panels.